This project documents the steps used to generate the supporting data used on the Spatial Hydro-Ecological Decision System (SHEDS). It includes descriptions of products and processing related to:

The high resolution delineation spatial layers, basin characteristics, and documentation files have been made available on the SHEDS GIS Data download page. The specific layers made avilable are described in the respective sections below.

Further details about the data sources related to each product can be found directly in the product repositories.

The NHDHRDV2 is a series of GIS layers representing hydrologic catchments and flowlines spanning the Northeast region of the United States. The catchments are similar to existing products such as the well-known NHD Plus dataset. Based on the National Hydrography Dataset (NHD), catchment layers contain fields to indicate routing paths which can be used to establish the network structure. Some basic information about the layers is also included in the attribute tables. Layers representing riparian buffer zones in each catchment also exist.

The NHDHRDV2 seeks to address specific aspects of existing hydrography products that have proven to restrict their usefulness. Specifically, improved spatial resolution and consistency are the focus of the development of these products. Catchment delineation is based on the high resolution NHD flowlines. Currently, there are no known large scale catchment products derived from this more detailed layer. One primary focus of this product is to capture small headwater streams omitted by existing products such as the medium resolution catchments in NHDPlus Version 2. Representing these streams can be critical to understanding key ecological interests. Figure 1 shows the added catchment detail from the high resolution streams in the Westbrook stream in Whately, MA.

Resolution consistency is addressed in the creation of the high resolution catchments. The NHD Plus Version 2 catchments, derived from the medium resolution NHD flowlines, are unnaturally inconsistent in area. The inconsistency is evidenced in Figure 2, which shows a regional view of the catchments. The unnatural catchment area differential shows up as straight lines between lighter and darker shades, indicating lesser and greater density of catchments respectively. These inconsistencies permeate the entire dataset and are a result of the varying resolution of existing hydrography data in the region. The areal inconsistency presents a problem for models relying on drainage area as a driver as well as for visual representation of data layers. 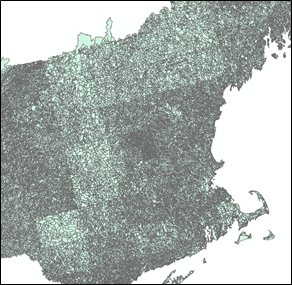 The issue shown above in the medium resolution layers also exists in the high resolution flowlines. It is evident from examining the flowline layers that the dataset has been processed in a gridded format at differing resolutions. The catchments are developed using a methodology for improving areal consistency. The hydrography layers created by this method are derived from a 30m resolution digital elevation model and the NHD high resolution flowlines. The high resolution flowlines edited by the Designing Sustainable Landscapes (DSL) Project to eliminate network gaps, correct flow direction, and remove coastline from the majority of the flowline layer used. Raw NHD flowlines were edited in general accordance with the DSL Project methodolgoy to produce whole watersheds that are not artificially split along poltical boundaries. Figure 3 shows the expansion added in the delineation effort.

The final products adhere to an established areal consistency while managing to include higher resolution streams than the medium resolution products. The high resolution catchments, network, and flowlines form the foundation of the other data in this project that go into SHEDS. The layers are divided by hydrologic region as shown in Figure 4. Comprehensive documentation and citations for source data can be found in the NHDHRDV2 Documentation file.

In addition to the existing hydrography layers, it is possible to utilize the processing effort for delineating user-specified locations. The MassDOT Deerfield Culvert Delineation exemplifies this process for a separate project. Watersheds are delineated from a culvert location layer and landscape attributes within the watersheds are assigned to each culvert location.

The spatial hydrography products described in this section are currently available on the download page. Each of the 4 layers described below are grouped into the "spatial_XX.zip" files for each of the 6 hydrologic regions in Figure 4.

The catchments layer consists of polygons representing the drainage area contributing to individual stream segments in the "truncated flowlines" network described below. One catchment polygon exists per stream segment. A segment is defined as the reach in between confluences. The table below describes the fields in the shapefile attributes table.

The truncated flowlines layer consits of polylines representing the delineation flowlines used to define the catchments. These flowlines are an adjusted version of the high resolution flowlines. In this layer streams are only initiated if they meet the minimum 0.75 square kilometer drainage area threshold. The table below describes the fields in the shapefile attributes table.

The detailed flowlines layer is a polyline representation of the high resolution flowlines mapped to the catchments. Multiple stream segments may exist for a single catchment with no intra-catchment network identifiers present in the layer. The table below describes the fields in the shapefile attributes table.

The region boundary layer is simply the outline of the catchments layer for the hydrologic region. The table below describes the fields in the shapefile attributes table.

This section assigns a variety of attributes from different sources to the hydrologic catchments in the NHDHRDV2. The basin characteristics are spatially attributed to the zonal catchment layers through a series of ArcPy and R scripts. Varying source data structures are processed to create uniformly structured value raster layers that are attributed to the individual catchments and aggregated to larger basins based on the network structure of the delineation product. The repository provides an in depth description of the processing steps and the different characteristics assigned. For a full list of variables refer to the NHDHRDV2 Covariate Documentation spreadsheet.

The basin characteristics for the delineation products are made available on the download page. Spatial averages for the full list of variables exist over 4 zones: the catchment area plus 3 riparian buffer zones (50, 100, and 200ft). Each of the 4 zones are grouped into the "covariates_XX.zip" files for each of the 6 hydrologic regions in Figure 4. The table below describes the fields in the covariate CSV files.

This section takes advantage of the gridded daily surface weather and climatological summaries known as Daymet. A daily timeseries is assigned to all catchments in the NHDHRDV2 for all available climate variables over the entire record (1980-2014). The repository README documents the process for assigning the climate records to each hydrologic catchment in the NHDHRDV2.

The tidal influence layer represents all water bodies within the SHEDS spatial range that experience some form of tidal effect. Spatial layers from the U.S. Fish & Wildlife Service - National Wetlands Inventory are processed to generate a spatial polygon layer of all of the tidal zones. The processing documentation exists in the repository README. This layer is primarily used to flag observed stream temperature sites that may be influenced by tides.

The impoundment influence layer is developed to represent the stream sections within the SHEDS hydrologic network that are impacted by impoundments. The product is a polyline layer representing the stream segments of a user-specified distance downstream from each impoundments location. The impoundments dataset comes from the DSL Project where the locations from The Nature Conservancy's dam inventory were snapped to the NHD high resolution flowlines. This source layer is not public and the resulting layer is only used within the SHEDS group. The processing documentation exists in the repository README.